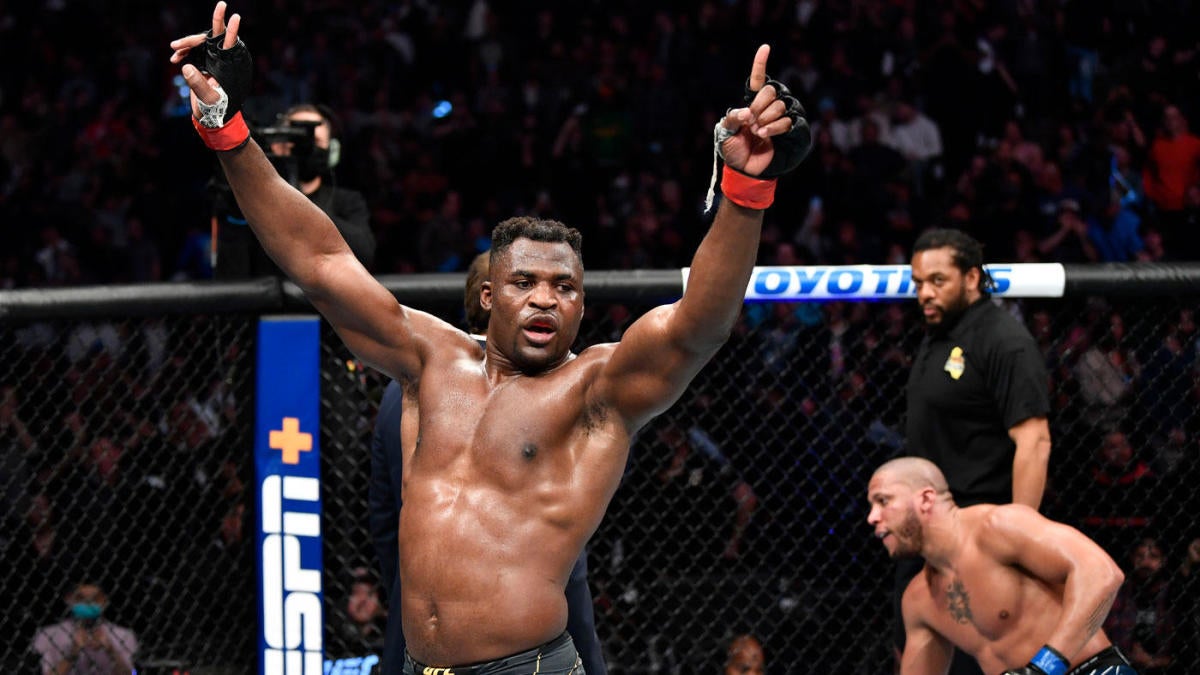 When the UFC 270 main event between heavyweight champion Francis Ngannou and interim champ Ciryl Gane was made official, it’s unlikely anyone expected an Ngannou win to come on the strength of his wrestling and jiu-jitsu. That’s exactly how the fight played out on Saturday night, however, with Ngannou surviving some rough early rounds before leaning on an unlikely combination of takedowns and ground control to pull away and take a unanimous decision victory inside the Honda Center in Anaheim, California.

Gane came out wanting to grapple with Ngannou, pushing forward and ending up in a clinch, though Ngannou was able to easily fight off the takedown attempt. From there, the expected striking battle broke out, with Gane using his slick footwork to try to move around the Octagon and pick angles and Ngannou looking for his trademark bombs.

The problem for Ngannou was actually finding Gane to land those shots. The grappling early appeared to drain Ngannou’s gas tank and he then was forced to chase Gane around the Octagon, with Gane casually moving, turning sideways and touching Ngannou with a variety of strikes as he built up a lead through cleaner work in the opening rounds.

In the third round, Ngannou finally had a moment, catching a Gane high kick and turning it into a massive body slam to end up on top in side control. Gane was able to escape back to his feet, only taking a few punches when he gave up his back to get back to standing only for Ngannou to again briefly take the fight to the ground. Shockingly, Ngannou scored with another takedown late in the round.

Can’t get enough boxing and MMA? Get the latest in the world of combat sports from two of the best in the business. Subscribe to Morning Kombat with Luke Thomas and Brian Campbell for the best analysis and in-depth news, including complete coverage of UFC 270 with instant analysis as the conclusion of the PPV event.

Having seen an unexpected side of Ngannou’s game, Gane looked to maintain distance with a steady diet of kicks in the fourth round, but Ngannou managed another takedown when he was able to close the distance and grab a body lock. Gane fought back to his feet only to be taken down yet again, keeping the fight on the ground for the remainder of the round.

With the fight seemingly tied up at two rounds apiece after Ngannou’s grappling had turned the tide, the fifth round seemed to be where the fight would ultimately be decided. After some early striking from Gane, he stepped inside and scored his own takedown, putting Ngannou on his back. Gane then made a pivotal mistake, abandoning the position in search of a leg lock.

Ngannou survived the leg lock to end up in top position, battling to improve his position while not doing much damage with strikes before the final horn.

“I knew that he was going to be a tough opponent, no doubt,” Ngannou said after the fight. “I was surprised that he held on to the end of the fight but he was very good. The only thing that I had to do, that my coach reminded me all the time, was stay composed. Trust yourself, don’t chase him.”

Ngannou also confirmed rumors of a pre-fight knee injury while discussing the build to the fight.

“I hurt my knee, tore my MCL completely and hurt my ACL,” Ngannou said. “I wanted to pull out of this fight but couldn’t see myself retreating from this fight because it was a chance to make a statement and remind everyone that I’m the champ.”

In the other title fight, Deiveson Figueiredo reclaimed flyweight gold with a decision win over Brandon Moreno. In a bout that may have surpassed their thriller from December 2020, neither fighter seemed to get the upperhand for a sustained period of time. Each had an answer for the other’s best strike and went back and forth over the course of 25 minutes. In the end, the Brazilian had his hand raise and called for a fourth battle with Moreno to take place in Mexico.

CBS Sports was with you the entire way on Saturday bringing you all the results and highlights from the UFC 270 below.